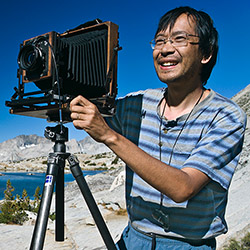 Bios of various length written in the third person

Born in Paris, France to Vietnamese parents (name in Chinese: 梁光俊), I was originally trained as a scientist (Louis-le-Grand, Ecole Polytechnique X84, PhD University of Paris), and made fundamental contributions to the fields of Artificial Intelligence and Image Processing, detailed in The Geometry of Multiple Images.

In the mid 1980s, my life was transformed by the wilderness of mountains. As a climber, and then mountain guide, I was initially interested in photography as a means to communicate to people who weren't there the wonders I had seen on the high peaks of the Alps.

This participatory approach to photography continued with travels, which have taken me to natural and cultural destinations on five continents. I am fortunate to have experienced an immense geographic range, from climbing the summit of Denali in Alaska, to scuba diving under tropical seas.

In 1993, another turning point happened. Attracted by the proximity of Yosemite's famous cliffs, I found my way to the University of California, Berkeley for what was originally planned as a short stay. There, inspired by the rich tradition of American landscape photography, I learned to use the large format camera. As I felt in love with the diversity of the national parks, I set out for a monumental nature photography project that had not been completed by anyone: photographing all of them in on large format film. I made my home in the San Francisco Bay Area. Years of outdoor adventuring experience proved useful when exploring the backcountry of many parks, occasionally hiking in trail-less terrain with a 70-lbs backpack, paddling kayaks and canoes during extended expeditions.

In the summer of 2002, when I visited Kobuk Valley National Park in Arctic Alaska, I was probably the first to have photographed the (then) 58 national parks. I continued this streak through the 63 national parks and remain the only person known to have done so with a large format camera. In the early 2000s, I had added a full-frame digital cameras to my toolkit, expanding the range of images to include the stary night sky.

I had found an audience since 1995 with my first website, the Mountain Gallery, which was expended into this website in 2001 and has since led to hundreds of publications in more than thirty countries. Its popularity as one of the most visited of individual photographer's websites allowed me to turn to photography full-time in 2007. However, I also remain committed to the physicallity of the print as a means to inspire viewers to visit and care for our public lands. The traveling exhibition I organized has shown in museums and galleries nationwide and abroad.

In 2009, Ken Burns and Dayton Duncan featured me as one of the few living characters in the PBS film The National Parks: America's Best Idea. To celebrate the National Park Service Centennial in 2016, for which one of my images was used on a postal stamp, I released my signature book Treasured Lands: A Photographic Odyssey through America's National Parks. It won 12 national and international awards and became a critically acclaimed best-seller. In 2020, the National Parks Conservation Association honored me with the Robin W. Winks Award for Enhancing Public Understanding of the National Park System. I live in San Jose, California, with my wife, two children, and a Chihuahua dog named Peanut who used to run half-marathons.