Lake Clark has been called "the essence of Alaska", for it concentrates in a relatively small area of the Alaska Peninsula, Southwest of Anchorage, a variety of features not found together in any of the other Alaska Parks: the junction of three mountain ranges, (the Alaska Range from the North, the Aleutian Range from the South, and the park's own rugged Chigmit Mountains), two active volcanoes (Iliamna and Redoubt), a coastline with rainforests on the East (similar to South East Alaska), and a plateau with tundra on the West (similar to Artic Alaska), and turquoise lakes.

Despite being only a one hour flight from Anchorage, the Park is one of two least visited, and offers ample opportunity for solitude and exploration of uncharted terrain. Because of the ease of hiking there, four of us chose to backpack on the western plateau for a week. We first flew on a small airplane to Port Alsworth, an interesting bush community on the shore of Lake Clark, where the ranger station receives so few visits that it is not continuously staffed. We then boarded a floatplane that dropped us on the shores of aptly name Lake Turquoise, and after exploring the adjacent towering valleys for a couple of days, moved to Twin Lakes where we had a rendez-vous with the floatplane. See also the pictures of backpacking. 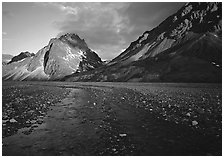 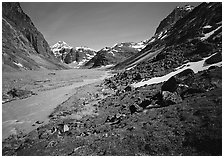 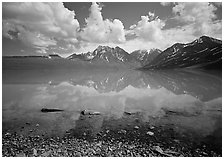 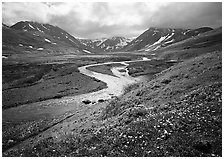 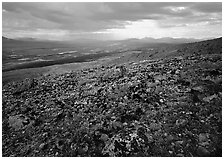