Giant Sequoia National Monument consists of two sections. In the northern section, with a maximum depth of 8,200 feet (2,500 m), Kings Canyon is one of the deepest canyons in the United States, going goes from sub-alpine meadows and sequoia forests to the dryer and warmer canyon bottom, where yuccas thrive. Almost all old growth sequoias have been logged, except for the Boole Tree, the largest tree in outside of a national park. The southern section includes the best giant sequoia groves outside of a national park. Both sections feature wild rivers and remarkable rock formations such as Buck Rock, the Needles and Dome Rock. 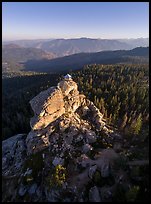 All text and photos © QT Luong. See conditions for use of images.
All the 133 color pictures of Giant Sequoia NM are on this page