Mono Lake, the oldest lake in North America, used to lose its water only by evaporation, becoming in the process alkaline and hyper-saline, like the Dead Sea in Israel. In order to provide water for growing Los Angeles, water was diverted from the Owens River and then from the tributaries that fed Mono Lake. This caused its level to fall, exposing once submerged tufa towers (a rough, thick, rock-like calcium carbonate deposit that precipitates from calcium-bearing spring water in an alkaline lake rich in carbonates) that are the most spectacular feature of the Lake.

The high population of single-celled algae present in the warm shallow waters creates a rich food chain. The absence of competition from fish (due to the high salinity of the water) make it a vital resting and eating stop for nearly 2,000,000 migratory water-birds. This critical nesting habitat for several bird species make it one of the most productive ecosystems in North America, but this has been threatened by the decline in water level. Owens Lake, which sustained a similar ecosystem, completely dried up because of water diversions. Mono Lake was spared the same fate on September 28, 1994, when the California State Water Resources Control Board issued an order to protect Mono Lake and its tributary streams. Since that time the lake level has steadily risen. 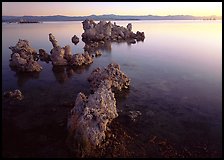 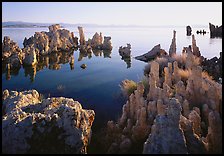 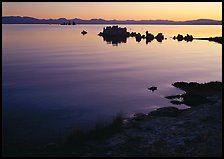 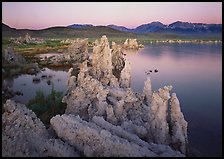 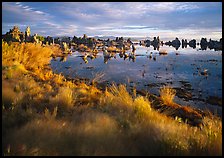 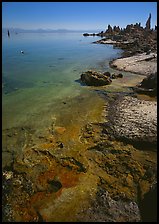 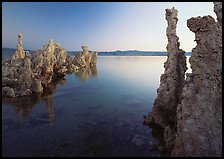 All text and photos © QT Luong. See conditions for use of images.
All the 37 color pictures of Mono Lake are on this page